Fridays are “Project Day” in our house: the day to get to all the fun things that we can never make time for during the week!   We rotate through language arts, math, science, and art projects.  The past few weeks we returned to an old favorite, the Grammar Garden.

Use a favorite toy to elicit creative writing.

The kids spent a few minutes building their gardens using the Lego characters, special pieces, and a few building pieces.  Then we went through and named all the nouns in their garden.  At that point they were losing interest, so we put the gardens on a shelf for the next week.

The next Project Day we added verbs and adjectives, and talked about how the different pieces of the garden might fit together into a story. 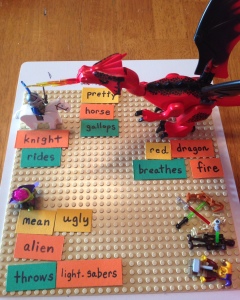 Finally, in the third week we wrote our stories.  A highly motivated child might be able to do this all in one day, but I find that 15 minutes is about our limit, especially with a 6-year old participating!  The kids dictated their stories to me, and I typed them into the computer.

“The brave knight rides the pretty white horse to the dragon’s hill. He climbs the mountain. A red dragon breathes hot fire at the knight. The knight beat the dragon. He climbed the rest of the hill and saw a mean, ugly, and smart alien. The alien was throwing his light-sabers at droids. Then the alien threw Thor’s hammer at a man dressed as a clown.”

“Once upon a time, a rock goblin ate an electric man’s hat. The man was scared of the goblin, so he ran and jumped into the ocean.   Then he saw two sharks, right before he jumped off the ocean diving board. He realized the stupid sharks were artificial. When the electric man got out of the ocean, he saw a Stormtrooper riding a horse with a pet rat.   The Stormtrooper saw Mace Windu carrying a rare crystal on his head, so he stole the crystal and went to worship the tiny dog.”

Any favorite toy works for this project.  When my teenager was 7 or 8, her favorite toy was Polly Pockets.  She would build elaborate scenes with them, and then act out a story.  I would write down her story into a “book” (printing paper folded and stapled – super fancy!).  She loved to draw, so she would illustrate her stories.  Those books are some of our favorite mementos from her childhood!

A meal consisting of several dishes from which guests serve themselves. A guest may choose small bites from many dishes, or a large portion from one dish, depending on preference and appetite.