This year I’ve started taking my younger kids to a Classical Conversations group once a week.  I wasn’t sure how they would like it, but we needed a way to meet new friends in a new city.  So far they love it.  In the younger years it’s just memory work set to songs and games.  It’s right up their alley.  One of their favorite subjects is geography.  Each week they spend a few minutes tracing a map of the US in pencil.  It’s always very rushed, so they asked to try it at home, relaxed and with their favorite drawing tools.

Trace a map.  This exercise is meant more to familiarize the student with the map, not for specific work in recognizing the states/countries.  That element comes later after familiarity is established.  (Maps below are from 2 of my kids, ages 7 and 9). 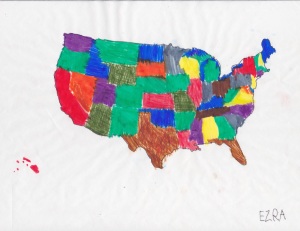 Tape the tracing paper to the map and trace.  At first, only trace one or two states/countries, especially if the student is still developing fine motor strength.  (My daughter who struggles with handwriting sometimes prefers this exercise to handwriting practice.  I’m completely fine with that, as she will spend longer, and get more muscle practice, with the map.)  Over time, add more pieces as the shapes become more familiar.  If the child has interest, trace the same map multiple times over a few weeks, or even longer.  If you meet any resistance or frustration, put the map away and pull it out later.  Do only one state a week if that pace works!

A meal consisting of several dishes from which guests serve themselves. A guest may choose small bites from many dishes, or a large portion from one dish, depending on preference and appetite.